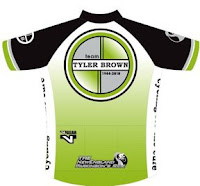 Eric will be riding to honor Margaret Miller, his mother-in-law who passed away from PD last fall.

If you want to learn more about the team, about the Michael J. Fox Foundation, the NE Parkinson's Ride or make a donation to team Tyler Brown, please visit the team page HERE
Posted by Belfast Bicycle Club at 8:05 AM No comments:

A bicycle club for riders of all genders and ages. Weekly group rides from Belfast and Searsport, Maine offer rides of distance and pace for just about anyone.

Got Questions? Send us an email.

Other Sites You Should Check Out

Next Meeting will be Tuesday January 22nd @ 6 PM. All are welcome, bring a snack or refreshment to share.


All Club meetings will be held at The HUB / Bay Wrap in Belfast, ME unless otherwise noted

Promote Your Page Too